President of the African National Congress, Comrade Cyril Ramaphosa, called for “a new social compact among all role players – business, labour, community and government – to restructure the economy and achieve inclusive growth”. This 50th edition of Umrabulo Journal themed “Social Compacting”, digs into some detail about the prospects of the how’s and goings-on of this conception in South Africa.

Constructing South African Social Compacting by Yoli Makhasi points to a reminder of President Ramaphosa’s plea for social forces in society to come together. This, she argues, is demonstrated through the February 2020 State of the Nation address which refers to the word “compact” at least ten times. Heightened with a 16 times mention of “together”.

At the core of her perspectives is the argument that “The developmental state as envisaged in the NDP requires that we build a cohesive state that is united in action with the people, labour movement, the government etc. A social compact that binds all social partners to an agreement that commits all in actions that address poverty, unemployment, inequalities and related social ills as a priority is critical.”

The Pathfinders Towards Social Pacts is a collaborative article by David Francis, Imraan Valodia and Edward Webster which directs one to pointed questions that needs answering to propel us forward. They ask, “are there specific conditions that make for successful social compacting? Why have the previous calls for social compacting failed? Are current conditions more favourable for a successful compacting process? What would the content of such a compact be? And what compromises are implied by a meaningful social pact between the state, labour, business, and civil society and with what goals in mind?”

Yacoob Abba Omar demonstrates the umbilical cord between social compacting and social cohesion in Social Cohesion As A Bedrock To Social Compacting. A point of view eloquently stated by arguing that the required outcome “must not paper over the various fault lines but must forthrightly address poverty, unemployment, indebtedness, racism, sexism and inequality.” Also that this “requires the ANC and its government to act as the ‘healers in chief’ so that we confront the realities of SA with a commitment to making our land a peaceful and prosperous one.”

This 50th edition of Umrabulo intends to contribute towards comprehension and execution of South Africa’s social compacting. This is borne of the fact that mass support and contribution is critical for social compacting to become a successful and sustained reality. You are therefore encouraged to share your readings and understanding of issues raised in this publication. You can also write to us at umrabulo@ortamboschool.org.za to share some of your thoughts 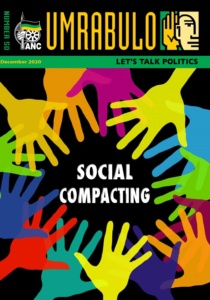 The school recorded a number of successes in its first year of operation.

Motivated by this progress, OR Tambo School requires additional resources which will enable it to accelerate on its record of delivery

SKU: donation-8299 Category: Donate to us

OR Tambo School of Leadership seeks to build agents of change who have a well-rounded worldview. This political school is an autonomous educational institution to build the ideological, intellectual and organizational capacity of the African National Congress and the broader progressive and democratic movement.